Veteran Vancouver chef shutters flagship restaurant after over a decade

After a dozen years, a respected Vancouver Italian restaurant is no more.

After a dozen years, a respected Vancouver Italian restaurant is no more.

Main Street's Campagnolo, which closed temporarily in March as COVID-19 restrictions began in the city, has announced they will not be re-opening.

Campagnolo launched in 2008, and was the initial venture of Tom Doughty, Tim Pittman and Robert Belcham - the latter, Chef Belcham, is a well-regarded leader in the local culinary scene, having made waves previously for his ambitious Fuel and ReFuel in Kits, before moving on to Campagnolo.

The restaurant, which focused on rustic northern Italian food, was for a time a flagship location, as Campagnolo expanded to include the Campagnolo Roma outpost in East Vancouver, which shuttered in late 2018 after seven years.

Campagnolo was known for its menu of fresh pasta, pizza, and crave-worthy starters. Additionally, Belcham and the team cured meats in-house for their charcuterie, taking part in the process starting with butchery and ending on customers' plates.

Sadly, the closure of Campagnolo on Main also means the end of its bar-restaurant sibling, Campagnolo Upstairs. The Upstairs venue, situated - literally - upstairs from Campagnolo, is beloved for its trim menu of simple but well-executed bar-style dishes, including their famous "Dirty Burger," all offered alongside well-made cocktails in an unpretentious space.

However, the end of the run for Camp and Camp Upstairs does not mark an exit for Belcham from the Vancouver restaurant scene. The chef is one of the partners behind Popina Canteen at Granville Island, the eclectic shipping container counter-serve casual eats spot that has a menu of globally and locally inspired fare, like juicy burgers and fried chicken sandwiches, along with salads, seafood, cocktails, and their signature "Puffcream" dessert.

Now there is a sibling venture to Popina in the works, Popina Cantina, another counter-service spot at Granville Island. The Cantina is focusing on tacos, and is situated in the Net Loft building, and will open this summer.

Sadly, due to COVID, fans of Campagnolo and the Upstairs cocktail bar are not able to enjoy a proper farewell meal.

Campagnolo calls their customers "the life blood of this restaurant," and is paying longtime loyals - and staff - homage in their goodbye. Though the face of Campagnolo is boarded up, those boards have now been painted to name important people from its 12-year run. 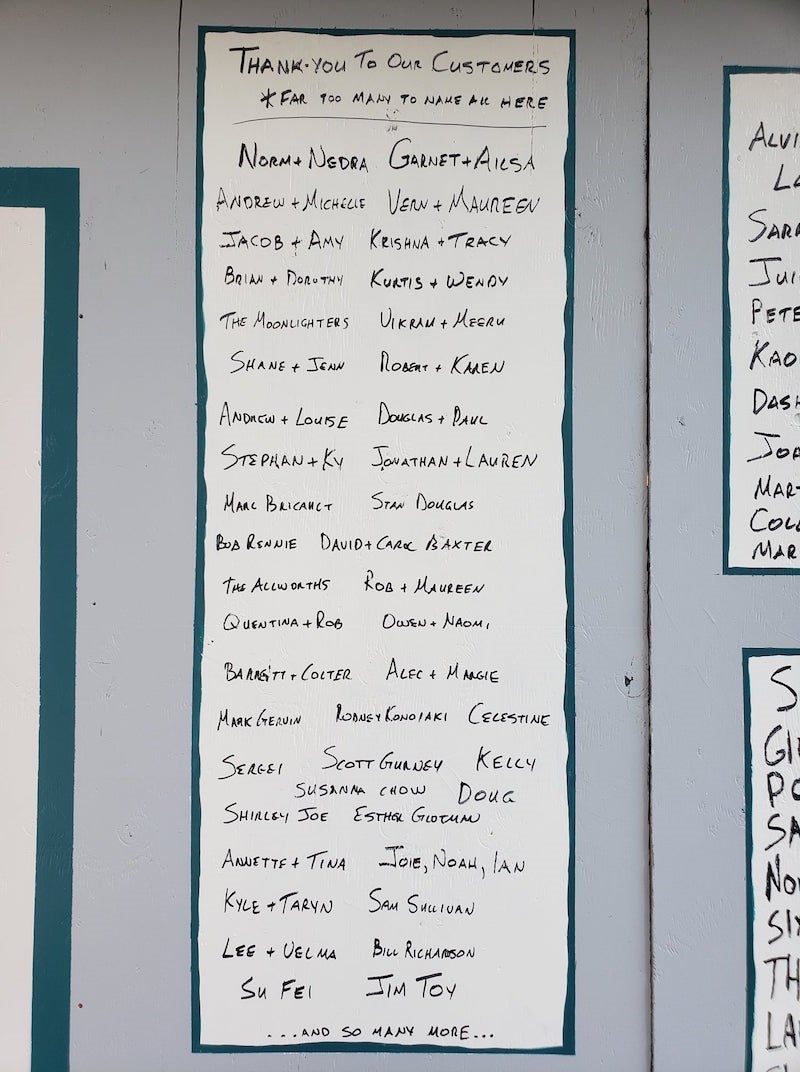 In 2008 during the biggest economic downturn of our generation, Tom Doughty, Tim Pittman and Robert Belcham built a regionally specific Italian restaurant focusing on pizza, pasta, salumi, great service and delicious wine. We accomplished that goal and built a loyal and amazing customer base that have been coming regularly for almost 12 years.

Now in 2020, we are left with the sad news that we will not be opening again.

In a perfect world, we would give notice to everyone, to give you all a chance to see us one last time. Well, the world has certainly set us on a different path and we are not able to do so.

Our customers are the life blood of this restaurant and we have had some amazing people cross our doorway, there are far too many to mention all by name here- Norm & Nedra, Garnet & Ailsa, Vern & Maureen, Rodney, Bob, Robert & Karen, to name a very few.. the list goes on forever. Our customers are like our family and we will miss them all. So many great celebrations, first dates, first kisses, birthdays, there have been weddings, special dinners, guest chefs and holiday festivities.

We would also like to thank all of the amazing staff we have had and that helped build and maintain our success over the last 12 years. Alvin Pillay our opening chef and Giovanni Girardino our opening bar manager, these two set the tone for our achievements and getting us out of the starting gate so strong. There are so many, Ted, Large, AJ, Nathan Lowey, JC, Paul Crouteau, Sarah Wilby, Sarah Wheeler, Sarah Jensen, Ioana, Jenny, Melissa, Turley, Scope, Big Cat, Ben, Mallory, James Shipton, Peter, Jordan Caverly, Colin, Bowes, Juicy, Matt Martin, Kumi, Brian, Greg, Tom, Jane... and so many more to name. Without these great cooks, servers, bartenders and managers our guests would never have understood our goal of serving great local food in a casual environment.

We look forward to seeing you in the future at new restaurants, hopefully we can make you become a regular guest once again.

Stay Safe out there.
Robert Belcham and Tim Pittman