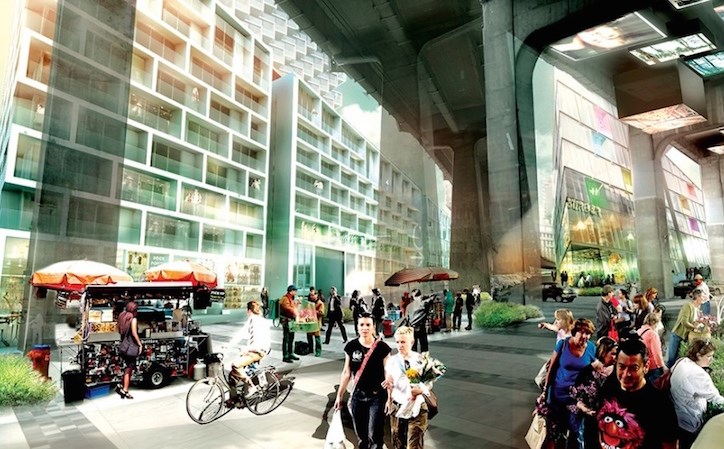 Fresh St. Market is one of the anchors at the new community retail hub at Vancouver House. Photo via Westbank

A popular suburban Metro Vancouver grocer is moving into the city. Fresh St. Market is opening their fifth location, and their first in Vancouver proper, with a store in downtown's Vancouver House that also contains a licensed restaurant.

Fresh St. Market, which has two Surrey locations, as well as one in West Vancouver and another to the north in Whistler, is the more upscale and locavore-oriented sibling grocer of I.G.A., which are both run by Georgia Main, the recently-rebranded food division of H.Y. Louie. The latter, of course, has roots in Vancouver dating back to 1903, and is perhaps now best known for owning London Drugs. London Drugs will also be an anchor tenant of Westbank's Vancouver House.

For this Fresh St. Market location, the concept is said to be drawn from "a public market like experience," according to company president Gary Sorenson.

The shop will feature a full-time cheesemonger, click-and-collect service, and local bike delivery. On the shelves and in the cases will be many familiar local brands - shoppers will see vendors like One Arrow, Lepp Farms, and Two Rivers, among many more. The seafood is Ocean Wise certified, and the store will not have any single-use plastic grocery bags.

Vancouver House is Westbank's visually-stunning "Super Prime" mixed-use building at the north end of Granville Bridge. Its 52-storey luxury residential tower, designed by Danish architect Bjarke Ingels of the firm BIG, is largely finished and the first phase of residential occupancy is complete. In addition to that giant public art chandelier, with the arrival of Vancouver House comes what the developer is positing as an entirely new neighbourhood: "Vancouver House is not only an architectural breakthrough, but the active core of a new waterfront neighbourhood called the "Beach District.'"

While elsewhere in the region retail feels like a dead end - particularly in the face of online shopping - that's not the case in these kinds of communities.

Grocery stores and other “needs of life” retailers are proving nearly immune to online competition, according to a November GWL Realty Advisors study, which notes that food-anchored neighbourhood shopping centres are now among Canada’s top-performing retail platforms.

Speaking of "experiential food destinations," Vancouver House is set this year to be home to David Chang's first Vancouver venture, an outpost of his Momofuku Noodle Bar concept from NYC.

Fresh St. Market and Fork Lift Kitchen & Bar will have a soft open on Feb. 6, and will open officially on Feb. 7. Grand opening activities are planned for Friday through Sunday, with festivities and programming planned in particular for Feb. 8.

Vancouver House is located at Pacific and Howe in downtown.

You can get some of the best foods from Granville Island vendors delivered right to you
Aug 13, 2020 2:13 PM
Comments
We welcome your feedback and encourage you to share your thoughts. We ask that you be respectful of others and their points of view, refrain from personal attacks and stay on topic. To learn about our commenting policies and how we moderate, please read our Community Guidelines.