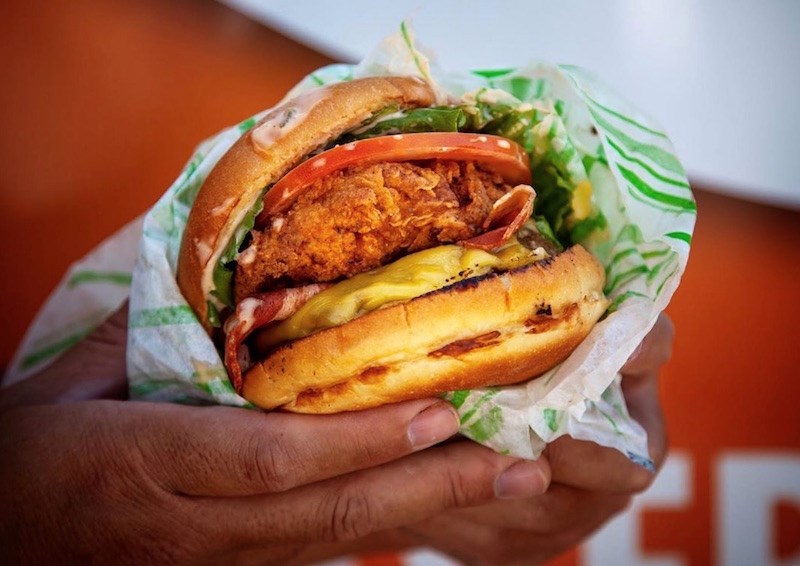 The Crispy Chick'n burger from the Veg Out food truck

You see them rollin'... and it's time to eat! Vancouver has been a food truck city for about a decade now, and while some trucks drive off into the sunset, and others set up brick-and-mortar restaurants, new ones still gear up to hit the streets.

There have been a few new food trucks and carts to get rolling in the past few weeks in and around Vancouver, and we've got all the juicy details. From plant-based burgers and shakes to Japanese specialties, to loaded Afghani-style wraps and bowls to beautiful scoops of ice cream in fusion flavours, there's plenty to choose from. Plus, as a delicious bonus, there's a familiar face joining the fray that's revved up their wrap, menu, and locations for a hot new relaunch.

This summer saw the debut of Takenaka's food truck. Based at Coho Commissary, Takenaka is behind some of the city's most beautiful, fresh, and delicious Japanese bento boxes and chirashi bowls. On the truck they've got beautiful sushi rolls, temaki, ebi mayo, and more. You can typically find them parked outside Coho (1370 E Georgia St), but check their Instagram for confirmed locations, hours, and more.

This new ice cream food cart recently got rolling in Vancouver, and it's run by a duo who fuse their Peruvian and Taiwanese roots into their inventive - and tasty - flavours. Right now they're scooping flavours like a salty-sweet Miso Pecan, a fully vegan Apples + Churros, classic Milk Tea (with or without toasted marshmallows), and Coconut Passionfruit - all showing off owners Heidi and Joe's influences with the ingredients and combos. Crema's adorable turquoise trailer is based out of East Vancouver's Coho Commissary. That's where you'll often find them parked outside, filling cups with ice cream, and add-ons like fresh bubble waffles. Additionally, Crema takes the trailer on the road; you can use the Vancouver Street Food App to find them.

You can read more about the new Crema ice cream truck HERE.

Main St and West Broadway's East is East recently got their plant-based food truck Travel the East rolling. The truck's 100% vegan Afghani menu focuses on bowls and boulani (whole wheat roti wraps) with fillings like Afghan eggplant or savoury chickpeas. Find them Tuesday through Sunday from noon to 8 p.m. on Commercial Drive. Follow them on Instagram for updates.

Veg Out - Plant Based Burgers & Shakes

The vegan burger game is getting stronger and stronger in Metro Vancouver, and that includes the new Veg Out truck, which rolls out to several locations across Metro Vancouver (but not in the city itself - no permits currently up for grabs for them). They're slinging totally vegan shakes, burgers, and fries, plus items like poutine, wings, and an epic Crispy Chick'n sandwich, too.

This one isn't new, but it is newly re-launching, so it's a bonus. The Le Tigre food truck is gearing up to get back on the road, and, with a fresh new look and a revamped menu, will re-launch officially on Friday, Oct. 30. The truck's menu is a meld of Le Tigre classics, like the Kickass Rice Bowls and Brussels Sprouts, and new creations, like stuffed bao (bun) sandwiches, a pork belly and herb salad, and "ugly" dumplings. Le Tigre 2.0 will make its encore debut at 33 Acres Brewing (15 W 8th) on Fri. Oct. 30, from 11:30 a.m. to 2 p.m. The truck will be at four locations, one each daily Tuesday through Friday, from 11:30 a.m. to 2 p.m. daily. Its initial schedule will find the truck parked at Broadway & Ash on Tuesdays; Railway & Jackson on Wednesdays; Granville & 10th on Thursdays; and at 33 Acres on Fridays.