The NDP leader laughed off the photo blunder, acknowledging the mistake likely wouldn’t have occurred for two white members of Parliament.
Dec 16, 2019 1:48 PM By: Dustin Godfrey 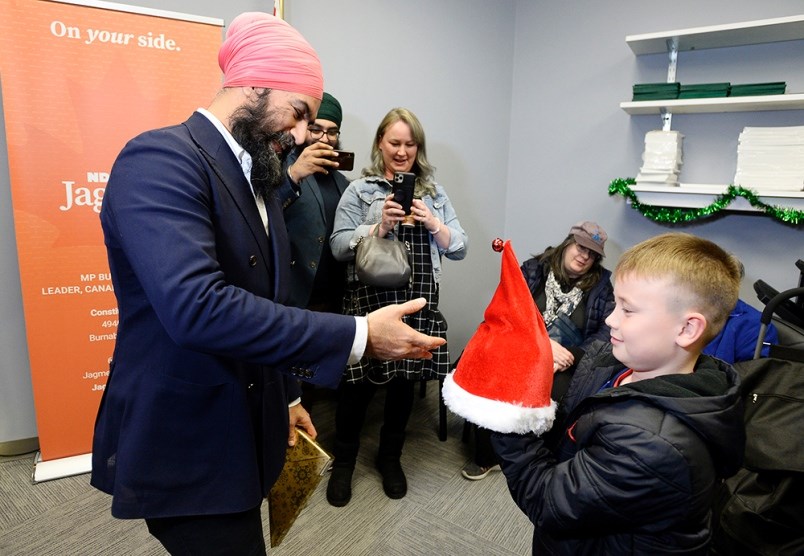 NDP Leader Jagmeet Singh laughed off a photo blunder that mistook himself for Defence Minister Harjit Sajjan, while acknowledging the mistake likely wouldn’t have occurred for two white members of Parliament.

A photo of Sajjan was attached to a story on a year-end CP interview with Singh, who is also the MP for Burnaby South.

The mistake came on the part of the Canadian Press wire service, and the CP photo desk Twitter account apologized over the weekend. But the incident gained wide attention from its publication on Sault Ste. Marie news outlet SaultOnline, which issued its own apology.

In a tongue-in-cheek tweet over the weekend, Singh asked what was wrong with the story. He added that the article itself was accurate, something he repeated at a holiday open house in his Kingsway constituency office, while laughing off the incident.

“The point of the article is that my goal is not to tear down government – I’m trying to push the Liberals to do what’s right – and that I wouldn’t be working with the Conservatives to topple the government,” Singh told the NOW.

Singh said he believes a lot of people “get typecast, and people don’t appreciate the differences.”

(Hint: It's true I've repeatedly said I won't work with conservatives because they continually push
cutting taxes for the wealthiest and cuting services, like healthcare and education, for everyone else) https://t.co/La4jaVkFVK

“In this case, I’m hoping people will finally realize that I’m not the defence minister or the minister for innovation,” he said, referencing, respectively, Sajjan and Navdeep Bains, both of whom are Sikhs who wear turbans.

Asked whether he believed the same mistake would have happened involving, for instance, Prime Minister Justin Trudeau and Conservative MP Pierre Poilievre, Singh said likely not.

“This is a bit of a problem. We’ve got to make sure we can tell people apart and particularly the leader of one party versus the minister of the other party,” Singh said.

CP mistakenly sent out a photo yesterday of Harjit Sajjan instead of Jagmeet Singh to accompany a year-end story. The error was fixed quickly, but remained on some sites. We sincerely apologize and will reach out to the affected clients.

In a speech to a packed room, Singh repeated the message of the article.

Singh said his key issues he expects to push the Liberals on next year are housing affordability, pharmacare and dental care, child care and the climate crisis.