Sometimes neighbourhoods were eliminated because an ex lived there or just its unsightly geographical shape
Jun 10, 2021 12:37 PM By: Cameron Thomson 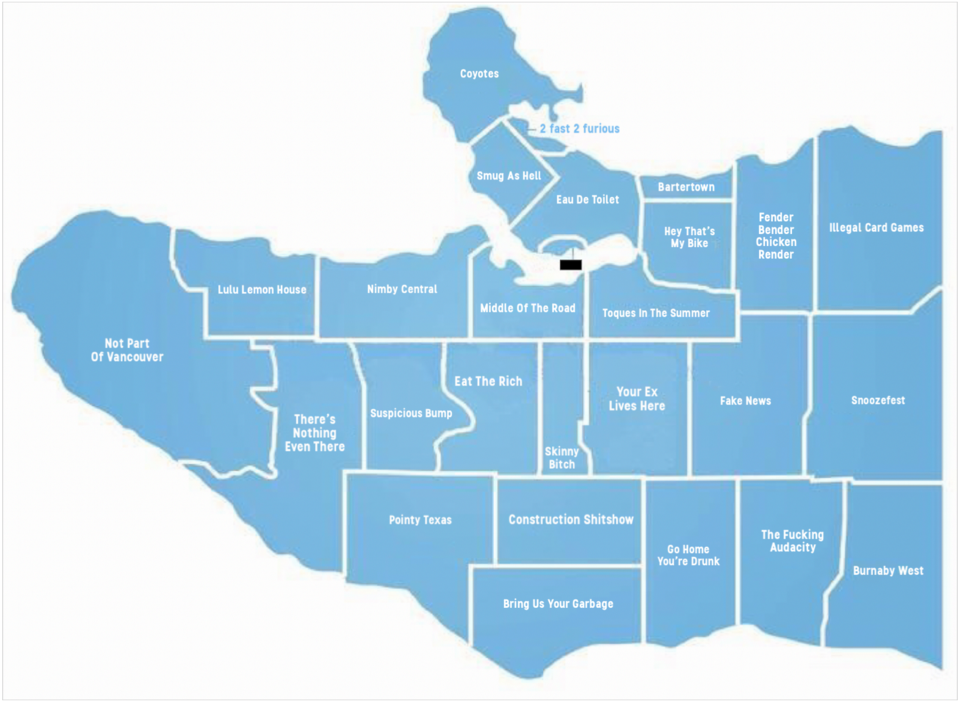 The names of Vancouver's neighbourhoods have been replaced with the reasons they were eliminated in a ridiculous online poll to determine the "least hated" neighbourhood in the city.u/GoldStarGranny

For nearly a month, Vancouver Redditors voted for which neighbourhood should be wiped off the face of the Earth until all but one remained.

Instead of using data that usually determines the best places to live like housing prices, the prevalence of bike lanes, or crime statistics -- this poll took a more personal approach. Started by Reddit user u/RedactedBrainz (who we're calling "RB"), the idea was borrowed from an Irish subReddit where a similar vote had seen widespread success and interaction.

A content creator by profession, RB explained in messages to Vancouver Is Awesome that they had never done anything like this before and thought it would just be a fun and silly side project.

“I wasn’t really sure what to expect, to be honest. Some people took it way too seriously at the start, but after a few rounds, more people started getting involved which was great to see and people were just having fun with it,” RB said.

“I think the reason it became so popular is because people are competitive by nature and if you live in a Vancouver neighbourhood, then you had a stake in the game,” RB said.

After the DTES fell, Shaughnessy’s fate was sealed with the comment: “Shaughnessy - EAT THE RICH” which garnered the most upvotes the poll would see with 1,104.

RB says “eat the rich” was a common thread for the first few rounds while members of other Vancouver subreddits like r/SFU did their best to get rid of UBC.

“The UBC students had the numbers to save themselves,” RB said. “Some neighbourhoods got kicked out for very specific reasons e.g. the coyotes in Stanley Park, or Kilsilano’s controversial Corduroy restaurant. Arbutus Ridge was knocked out because its geographical shape made people uncomfortable!”

Here is the complete list of the neighbourhoods in the order they were knocked out with the comment that doomed them.

RB’s own neighbourhood, the West End, was eliminated in round 22. While Mount Pleasant survived all the rounds, RB isn’t exactly sure what winning means.

“I guess it means that the neighbourhood is the least hated in Vancouver. Perhaps that means it’s also the ‘most loved’?”

RB has received many suggestions to create another map to knock out Greater Vancouver districts and says they are contemplating the idea.

MAP: Which Metro Vancouver parks and plazas can I drink in this summer?
Jun 3, 2021 5:26 PM
Comments