'We will see what the final count says': Wilkinson doesn’t concede election

BC Liberal Leader waiting for final count of thousands of mail-in ballots
Oct 25, 2020 8:46 AM By: Jeremy Hainsworth 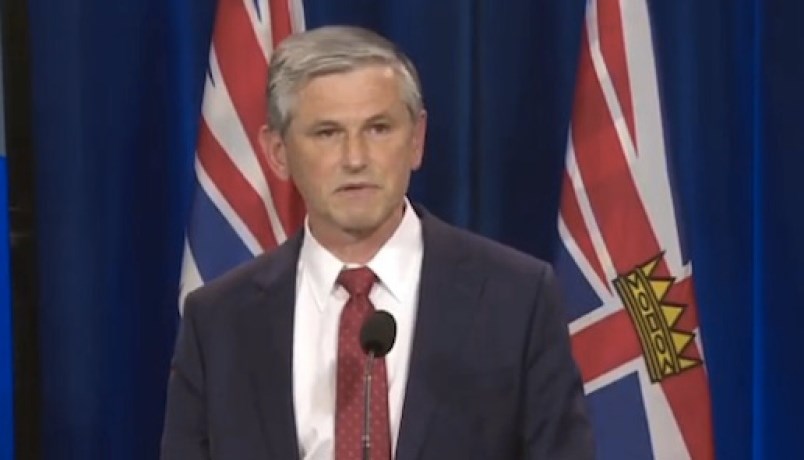 BC Liberal Leader Andrew Wilkinson is waiting for the mail-in ballots before conceding defeat in his run for premier even as his party trailed the NDP in the snap election after polls closed.

“We will see what the final count says,” Wilkinson said.

There are hundreds of thousands of mail-in ballots yet to be counted. That count will begin in two weeks.

“This has been an election like no other the middle of a global pandemic,” said Wilkinson, who handily took the Vancouver-Quilchena seat he has held since 2013.

He took no questions from reporters on hand.

In keeping with pandemic protocols, election night was low-key – only journalists and a smattering of party faithful and campaign staff on hand to hear Wilkinson’s remarks at a downtown Vancouver hotel.

Indeed, the evening had none of the usual electric suspense typical of an election night headquarters. However, little about the pandemic campaign has been typical.

Wilkinson pounded NDP premier-elect John Horgan throughout the campaign for calling the snap ballot during the COVID-19 pandemic, calling it unnecessary and a power grab.

"We'll have more to say going forward," he said.

He spoke for four minutes and six seconds.

Wilkinson had promised voters a one-year PST vacation with the tax moving to 3% in the second year of a mandate among breaks for seniors, changes to ICBC, building a 10-lane bridge to replace the George Massey Tunnel, better daycare access, expanding long-term care, assisting the mentally ill and addicted and investing in electric transportation and updating building codes among other pledges.

Of the three main party leaders, Wilkinson had to deal with the most tumultuous campaign, with allegations of homophobia, transphobia, sexism and a controversy about contraception.

Ma appeared destined to return to Victoria as election night drew on.

Wilkinson found himself defending Chilliwack-Kent MLA Laurie Throness, who has long been criticized for alleged anti-LGBTQ comments, the latest being his defence of so-called conversion therapy. That’s the practice of forcing someone to undergo therapy to change sexual orientation or gender identity.

Before that, Wilkinson said discrimination of any form has no place in the BC Liberal Party, that he has family members who are gay or lesbian.

He offered the same defence when asked about Langley East candidate Margaret Kunst, a former Langley Township councillor who came under fire after voting against a rainbow crosswalk in her community.

Kunst was in a close race with NDP challenger Megan Dykeman as the night continued.

But, when Throness October 14 compared the NDP’s proposal for free contraception to eugenics, Wilkinson took action. While it was too late to change ballots, Throness became an independent candidate.