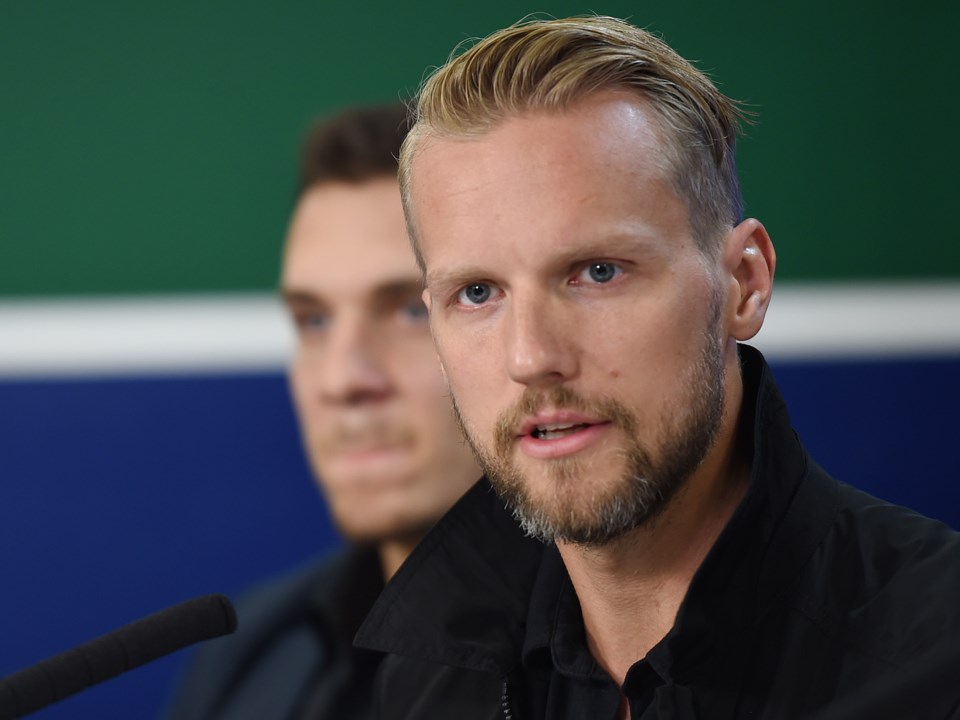 Alex Edler during the Canucks' 2019 preseason media availability. Edler was selected in the third round of the 2004 NHL Entry Draft. photo: Dan Toulgoet

Canucks fans will be waiting a long time for the team’s first pick in the 2020 NHL Entry Draft. Canucks GM Jim Benning and his amateur scouting staff are hoping it’ll be worth the wait.

At the draft, the Canucks won’t pick until the third round. Their first-round pick, 20th overall, was sent to the Tampa Bay Lightning in the trade for J.T. Miller and was later traded to the New Jersey Devils. Their second-round pick, 51st overall is owned by the Los Angeles Kings thanks to the trade for Tyler Toffoli.

It was arguably a price worth paying to get back to the playoffs, particularly since Miller is signed through three more years at a very reasonable cap hit and there’s a good chance the Canucks will re-sign Toffoli as well.

Still, it means the Canucks, barring a trade, won’t draft anyone until 82nd overall.

“Right now we don’t have a first or second-round pick,” said Canucks GM Jim Benning. “We’ll have to see what happens here in this next month leading up to the draft. We can try to recover a pick or picks.”

It’s hard to see how the Canucks would be able to recoup a first or second-round pick without losing a significant roster player. That would make the team worse at a time when they need to be taking a step forward, while also potentially forcing the Canucks to try to replace a player in free agency, a difficult task in their current salary cap situation.

For now, it’s probably best for Canucks fans to resign themselves to no picks in the first two rounds. For draft aficionados, it’s a bitter pill to swallow, as the first two rounds have the most exciting and compelling prospects. Finding a truly impactful player in the third round and beyond isn’t easy, but the Canucks will be looking for a diamond in the rough.

“Todd Harvey has been doing an excellent job for us, having Zoom calls with our area scouts, working on the list,” said Benning. “We’ve done interviews now through Zoom calls and they seem to be working out all right. We’re not gonna be able to do the fitness testing this year like we do in previous years, but I think we’ve had enough viewings of the players on the ice. We know the players that we want here going into the draft.”

“We’ll be ready for the draft to make good picks,” he added, “players that we think are going to fit into what we’re trying to do around here going forward.”

Unsurprisingly, the Canucks have far more misses than hits in the third round in their history, which isn’t surprising. The best and most promising prospects get picked at the top of the draft. They have been able to find a few players that carved out modest NHL careers, but their history bears out that it’s hard to find a star in the third round.

There are two significant exceptions, however, and I do mean significant: one was the first player to get his number retired in Vancouver, while the other is the best defenceman in franchise history.

The Canucks drafted Stan Smyl in the third round back in 1978 and he became one of the most beloved Canucks of all time. Smyl was a heart and soul player for the Canucks for 13 seasons, wearing the C as captain for 8 of them.

While Smyl was known more for his blue-collar work ethic than his skill, he was still a consistent 20+ goal scorer for the bulk of his career, hitting a career-high 38 goals and 88 points in the 1982-83 season. He also had a knack for big-game performances, putting up 9 goals and 18 points in 17 games during the Canucks’ 1982 run to the Stanley Cup Final.

An 896-game NHL career is not bad at all for a third-round pick, and the Canucks would be lucky to get a player like Smyl in the third round.

Beyond Smyl and Edler, there are a handful of respectable NHLers taken in the third round by the Canucks over the years.

Glen Hanlon had a 477-game career as a goaltender in the high-scoring 80’s, mainly for the New York Rangers and Detroit Red Wings. Peter Schaefer played 572 games, including a career-high 50 points with the Ottawa Senators in 2005-06. Then there’s Jarkko Ruutu, whose agitating ways kept him in the NHL for 652 career games, creating one of the greatest hockey gifs of all time along the way.

Their most recent sort-of-success story came in 2009 when the Canucks picked Kevin Connauton in the third round. Connauton has bounced around the NHL but has been able to find splashes of success with the Columbus Blue Jackets and Arizona Coyotes.

Other recent third-round picks have shown promise, but either failed to pan out or their future is still up in the air. Cole Cassels battled with Connor McDavid in junior but capped out in the AHL. Nikita Tryamkin showed promise before bolting to the KHL, where his game regressed. Benning likes Guillaume Brisebois, but he’s never really looked like an NHL defenceman in the few games he’s played with the Canucks.

The Canucks’ three most recent third-round picks could develop into legitimate NHL players. William Lockwood could find a home in the Canucks’ bottom-six, Michael DiPietro has potential as an undersized goaltender, and Tyler Madden was the best centre in the Canucks’ system until they traded him to the Kings in the Toffoli deal.

All that is to say, there’s real potential to find a decent NHL player in the third round, with an outside chance at picking a truly impactful player. The trick is to find a player that others have overlooked for various reasons.

For Smyl, it was his lack of size and numbers that didn’t leap off the page in comparison to his compatriots in junior hockey. Smyl was 5’8” and didn’t truly break out as a star in junior until he was 20. That’s when he erupted in the WCHL playoffs and then had a monumental Memorial Cup, leading the tournament with 4 goals and 14 points in 5 games.

Edler, meanwhile, was playing in a seldom-scouted third-tier Swedish league in his draft year, a league that then-GM Dave Nonis called a “glorified beer league.” Thomas Gradin made the trek to Edler’s rural hometown to see him play after hearing through the grapevine that Detroit Red Wings scout Hakan Andersson was interested in the young defenceman.

Gradin saw enough to convince the Canucks they had to draft Edler and Nonis engineered a trade to pick ahead of the Red Wings in the third round to ensure they stole him from Detroit.

That will be the challenge for Benning and his team of scouts.

The 2020 playoffs need to leave a lasting legacy for the Canucks both on and off the ice
Sep 9, 2020 10:33 AM
Comments
We welcome your feedback and encourage you to share your thoughts. We ask that you be respectful of others and their points of view, refrain from personal attacks and stay on topic. To learn about our commenting policies and how we moderate, please read our Community Guidelines.