We've got an understated wine bar, a restaurant inside a century-old butcher shop, and high-octane takes on casual classics like hot dogs, burgers, and tacos - and much, much, more - on this latest roundup.
Aug 24, 2020 9:59 AM By: Lindsay William-Ross 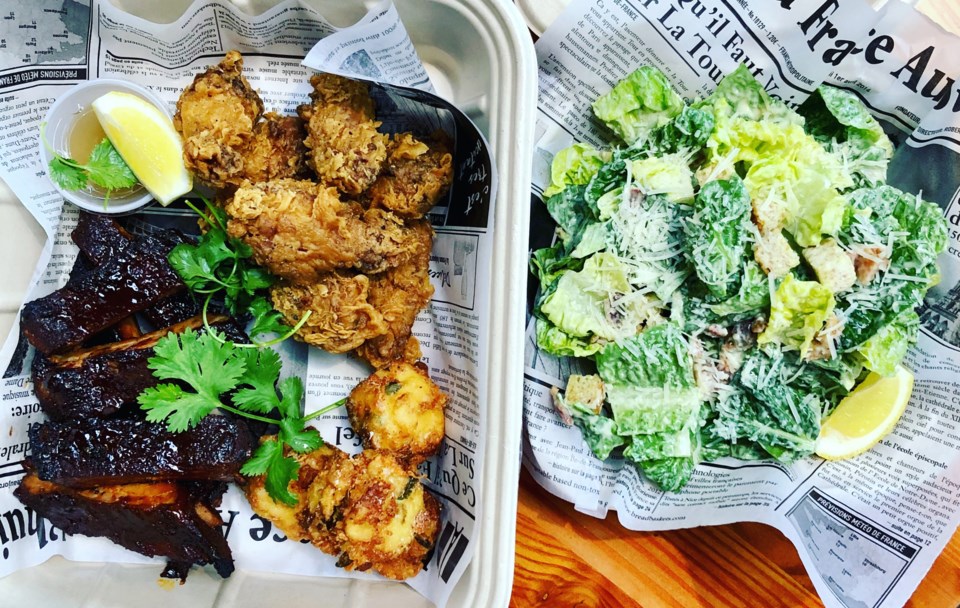 Hungry for something new to try? Vancouver's dining scene moves fast, and even during a pandemic restaurants are getting their doors open and dishing up dine-in and take-out eats across the city.

It's been an impressive few weeks for new restaurant openings in Metro Vancouver, which means more places to put on your must-try list if you're after a new dining experience. We've got an understated wine bar, a restaurant inside a century-old butcher shop, and high-octane (and kind of irreverent) takes on casual classics like hot dogs, burgers, and tacos - and much, much, more - on this latest roundup.

Previously home to The Tuck Shoppe, 237 Union Street has been transformed - minimally - to house Bar Gobo, a wine bar with small bites. Bar Gobo, in its initial iteration, was the lively pop-up offered at Burdock with wines, snacks from a variety of guest chefs, and tunes on vinyl. Bar Gobo as a concept has been solidified, and the focus is liquid: Wine. They've tapped 2020 BC Sommelier of the Year Peter Van de Reep to head things up. The venture is from the team behind neighbour Harvest and Main Street's acclaimed Burdock & Co.

It's the oldest business on Kitsilano's West 4th Avenue, and now something very exciting is happening at Jackson's Meat + Deli. The family-run butcher shop, which has been operating in the community since 1911, has just opened a 50-seat restaurant inside the space. They're serving in-house smoked and grilled meats, burgers, snacks, and salads, alongside B.C. craft beers on tap, craft cider, wine, and cocktails.

Vancouver is known for having an abundance of top-notch sushi joints, but this new spot in the city's West End isn't kidding when they say they are a "brand-new concept of Japanese restaurant." That's because at Sushi Aboard the sushi is served on a mini "bullet train" that runs along the restaurant's counter.

Vancouver's newest spot for irreverent tacos is open for business. Popina Cantina is a casual counter-serve self-described "boutique taco shop" set up in Granville Island's Net Loft building. Popina Cantina's menu is an eclectic and globally-influenced spin on the beloved and traditional taco. That's thanks to the "Three Amigos" behind the venture, local chefs Robert Belcham, Hamid Salimian, and Angus An, who - like at their kickback waterfront chic Popina Canteen - each bring their distinct culinary viewpoint to the Mexican staple.

A new restaurant specializing in udon, the thick wheat-based Japanese noodle, has recently opened its doors in Vancouver. The work of local Japanese chef Shin Iwamoto, Motonobu's udon noodles are handmade in house, using a special custom flour blend, and twice-aged. For their specialty selections, the chef is applying his French and Japanese training to create exciting fresh features for Motonobu's menu. Look for creamy udon topped with egg, and an assortment of side dishes.

Kinton Ramen, a brand launched in May 2012, comes from the Kinka Family company, which operates a half dozen concepts in Ontario and Quebec. For their first location in western Canada, Kinton Ramen has set up on University Boulevard on the UBC campus. Their lengthy list of ramen offerings include varieties with pork or chicken, as well as several that feature deep-fried pork or chicken (karaage). Sides include plates of karaage, takoyaki, gyoza, and more.

There's been a quiet switch up in South Granville, and while the neighbourhood has lost one of its beloved Lebanese restaurants, the good news is a fresh new venture offering the same cuisine has stepped in to take its place. Mazahr Lebanese Kitchen recently opened its doors in the space that had previously been home to JamJar. On the menu are several "mezza" for mixing and matching for a feast, as well as lunch platters. BYO wine, or choose from their herbal tea menu.

They've been brewing and selling their popular craft beers since 2015, and now Superflux Beer Company's flex finally includes a proper venue: anew brewery, tasting room, and retail store in the city's sudsy 'Yeast Van' quadrant, aka East Vancouver. With plans to launch the tasting room space in September, Superflux has started offering take-out from their retail shop, and the menu stars hot dogs inspired by some of the brewer's favourite dishes, such as Thai Green Curry, and Steak Oscar.

While COVID put Trans Am the bar down, it has not put them out of the burger game. Owner Gianmarco Colannino has just launched Turbo x Trans Am, a take-out operation doubling as a retail spot. In addition to Trans Am's signature juicy multi-napkin burgers, the shop has a quirky assortment of locally-made items for purchase, ranging from burger-embossed leather keychains to tees and vintage jackets, along with food like Mumgry peanut butter.

Beside Forage bills itself as a "relaxed counter-style service spot where you can grab and go, or hang out and listen to some music." The new venture in Timber's stead features a menu by Forage head chef Welbert Choi, and it includes casual items like BBQ pork ribs, fried chicken wings, fish & chips, french fries, and even ice cream sandwiches. Timber fans, heads up: the fried cheese curds are on Beside Forage's menu, too. Pair your eats up with a beer from the bar. They're also pouring B.C. wines, and have a simple cocktail list with basics like a sangria, vodka soda, and a house Negroni. PS: All the music on their playlist...B sides, of course!

Launched in late July, Straight & Marrow (in the old Bistro Wagon Rouge spot) is the venture of Chef Chris Lam (Provence Mediterranean Grill, Westin Bayshore, Nuba) and Bar Manager Chad Rivard (The Acorn, The Shameful Tiki Room, Odd Society Spirits), who are joined by General Manager Marc Dumouche (Provence, La Belle Auberge, Raincity Grill). The trio have each been fixtures on the Vancouver food and drink scene for the past decade and more. Look for nose-to-tail dining that reflects Lam's Asian heritage, paired with a cocktail list of a dozen signature drinks showcasing house-made infusions and syrup.

With a super-sized patio capacity and some deep-fried goodness to anchor their menu, The Roost has opened its doors in Vancouver's West End. Situated steps from the beach at English Bay on Denman at Comox, the eats here are centred around fried chicken, though there are a number of vegetarian options, too. The chicken, which is hormone and antibiotic-free, is sourced from the Fraser Valley, and things like the buns for their "handhelds" - aka fried chicken burgers (spicy or regular) or po'boys (fried artichoke or BBQ jackfruit) - are brought in daily. The Roost also offers their buttermilk fried chicken pieces in regular or spicy, and have several southern-tinged sides. To drink, they have beer, wine, and cocktails, including some fun barrel-aged house drinks on tap like a Negroni, an Old Fashioned, or a Boulevardier.

Inspired by the bounty of the Pacific Northwest, Time & Place's menu was created by Executive Chef David Ferguson, and features fresh options for anytime of day, including weekend brunch, happy hour and dinner. Fresh B.C. seafood, like salmon and shellfish, is plentiful on the menu, as are health-focused items and dishes for plant-based diners. The dishes are all very approachable, and hospitality is at the centrepiece of an experience dining at Time & Place.

Free Bird Table and Bar, which swooped in and took over Ceili’s Pub on Westminster Highway, opened up in mid-June and offers southern-style dishes using locally-sourced ingredients. Their signature dishes are their Nashville hot chicken sandwich and their fried chicken with waffles.

- With a file from Valerie Leung/Richmond News